Hello. My name is Alona Shechter and I suffer from psoriasis. 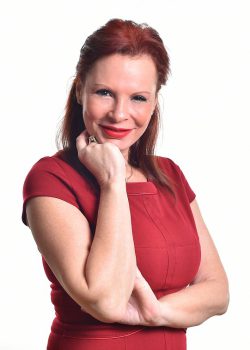 In 1987, when I was a mother to two little babies, I woke up one morning to discover that I had a red rash on my skin. I went to a dermatologist and was diagnosed with psoriasis.

A little bit about psoriasis: It is a genetic disease that attacks 3% – 4% of the population and has no cure. It makes the skin very dry, red and very thick. The disease is not contagious but looks really bad.

My Dermatologist sent me straight to the Hospital where I began a series of treatments. I was treated with cortisone creams, pills, and cortisone shots which really helped at first but then the disease returned.

I started puva radiation treatments but like the previous treatments it was unsuccessful.

After several months of treatments when I was very big and bloated, the head of the Department explained that he couldn’t help me and I needed to go home and learn to live with the condition.

At that time, as the mother of two toddlers, when my kids called MOM, and I made the simplest movement of my head, it would cause my neck area to bleed or as soon as I bent down to pick up one of the children I would get the same reaction on my hands and elbows.

It was clear to me that I was not prepared to live like this and I started to fight. I didn’t want to go back to the conventional treatments and began to seek out natural medicine. I had seen doctors and homeopathic therapists and Chinese-Acupuncturists, but nothing helped until I got to a dermatologist who combined conventional and natural medicines.

An expert on medicinal plants, the man looked at me and told me, unequivocally, “If you do what I ask of you, within one year, you will be clean.” He took all kinds of leaves and boiled them with fluids and oils, put into boxes and sent me home. He said to me very clearly that psoriasis is incurable; nevertheless the skin can look healthy.

When I got home I realized what needed to be done before and after. Nothing happened at first, but slowly for two or three weeks of using the cream, my skin started to relax, the wounds began to heal, the skin had suddenly softened and I was able to move my limbs and saw that nothing was torn or bleeding.

Then I started asking questions: What are these herbs? Can I solve skin problems using other herbs? What are the features of the healing plants?

I thought: “if they solved my problem maybe I can help others with daily problems such as: fungi, itching, atopic dermatitis, psoriasis, acne, hemorrhoids, wrinkles and pigmentation”.

At that time I started studying Dermatology and medicinal herbs and I realized that the skin does not know whether the packaging or the product is expensive or not. Our skin knows only one thing – in order for the product to be effective it should contain a high concentration and the correct combination of ingredients.

After my studies, I understood that my original doctor gave me the herbs in the highest concentration permitted by the Department of Health Regulations, so the effect was “bingo”.

In 1994 I established Alona Shechter Ltd. I purchased the formulas from the same dermatologist, developed them to a finished product and continued further development of products for the face, body and hair based on herbs and minerals from the Dead Sea, to resolve as many skin problems as possible.

*The result may change from person to person.